Welcome to the 2016 Spring newsletter. If you would prefer to download it, please click here for a pdf version.

Sue and I have been very busy during 2015, responding to enquiries from our counterpart organisations in Brazil. In our private capacity we continue with our programme of visits to schools and universities to deliver our beautifully-illustrated talks about the Xingu and its people. 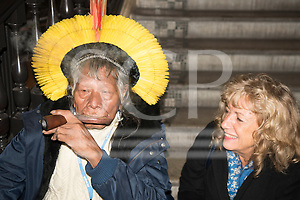 I must take this opportunity to thank all those people who have generously made donations to Tribes Alive during the year. We are especially grateful to those of our supporters who have elected to set up a monthly donation; having this regular source of income is particularly helpful. If you would like to join them, you can do so through this Just Giving link or by clicking the button at the top on the right hand side; or you are welcome to contact us for the charity’s bank details.

Many thanks for your support! 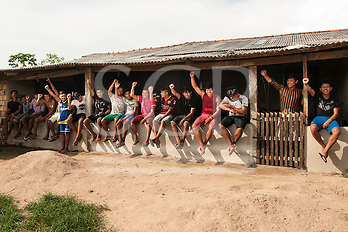 Now that many indigenous villages in the Xingu have their own primary schools, often with indigenous teachers, the Kayapo are concerned about secondary education for their future leaders.

For indigenous students, going to a mainstream school in one of the Amazon frontier towns can be a traumatic experience. They are exposed to drugs and alcohol, and they experience relentless racism. They often suffer violence, and there have been cases of students being murdered, or simply disappearing. They are away from their communities and their families in an alien culture, and struggle to fit in. Unsurprisingly, the drop-out rate is high.

Instituto Raoni, winner of the United Nations Development Programme’s prestigious Equator Prize (see below), has asked us to help with the construction of student accommodation for the Komomoyea Kovoero School, the only secondary school in the Xingu located within an indigenous reserve. You can see the students in the photo, sitting on the wall at the front of the dormitory, which is dilapidated and in desperate need of replacement.

We visited the school in November. It is run by Principal Cirenio and Director Cicera Terena, and at present caters for just 21 Kayapo students, from nearly twenty different villages spread over an area of rainforest the size of England. 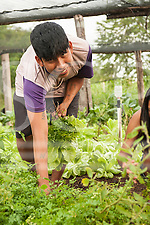 The students need decent conditions where they can study effectively and live comfortably, and that is why they have asked for our help. The initial project is modest; we have a target of £3,500. This small sum will provide all of the materials to build a new accommodation block with showers, WCs and a kitchen; most of the construction will be undertaken by the community.

In addition to teaching formal academic and technical subjects the school helps the students to develop their husbandry skills and encourages them to take responsibility for themselves while reinforcing their position within their own communities. The students produce most of the food they consume, in well-tended garden plots.

We hope in future to build on this initial project to enable a greater number of Kayapo teenagers to participate in mainstream education in a way which is compatible with their traditional culture.

STOP PRESS!
We have received a generous offer of match funding, so every £1 donation you make will raise £2 for the project.

Or you can donate using your mobile device – text ‘KYAP55 £10’ to 70070 – substitute whatever amount you want to donate.

Please be as generous as you can. The Kayapo need educated young leaders to become teachers, healthcare workers and lawyers.

Exhibition – Tribal Games in the Heart of Brazil

Photos from October’s International Indigenous Games make up most of the exhibition, which will be in the prestigious Sala Brasil at the Embassy of Brazil, 14-16 Cockspur Street (just off Trafalgar Square) from the 4th to the 27th March. There will also be an emphasis on the cultures of the Amazon’s indigenous peoples.

The Games were a celebration of the differentiation between indigenous peoples the world over and their mainstream industrialised neighbours. They presented an opportunity for peoples as diverse as the Maori of Aotearoa/New Zealand, the Sami of Finland and over twenty ethnic groups from Brazil to meet, often for the first time, and exchange experiences and cultural expressions. Sue’s photos, taken during the games, show a diversity of peoples with confidence in their traditions who brought with them the values they live by. Instead of consumerised materialism, these groups brought a spiritual sympathy wedded to their home environments, whether hot or cold, rainy or arid.

The exhibition also brings a rare sensibility of the lives of the peoples of the Xingu River basin, commanding respect for their varied cultures. As the First Brazilians they demand their right to the dignity which all cultures merit, regardles of the difference of their values and priorities. Sue’s vibrant images invite reflection on the right to dignity which, though notionally recognised internationally, remains fragile, even while her subjects demonstrate vitality and strength. 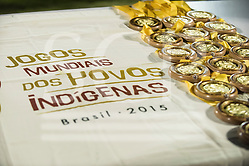 We travelled to Palmas, the recently-established capital of Tocantins State, for the Games. Indigenous people from all over the world assembled to participate in traditional sports like archery and log racing. Inevitably the football competition was the most hotly contested. Many of the delegations demonstrated their own games like Roncran, a Kayapo version of hockey played with a stout stick and a babassu coconut, and Xcaret, the version played by the Maya from Mexico with a flaming ball.

Here’s a longer report about the games with lots of photos:
International Indigenous Games 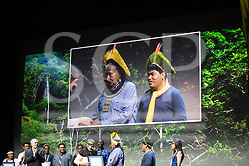 Our Kayapo partner organisation, Instituto Raoni, won this year’s United Nations Development Programme Equator Prize. This prestigious prize was awarded in the category of Protecting Forests, and recognises the part the Kayapo have played in preserving over two and a half million hectares of forest.

Here’s a brief video which explains the Equator Initiative:

Instituto Raoni was selected as one of just 21 winners, out of 1,461 nominated community groups. The award was made for ‘outstanding community efforts to reduce poverty, protect nature and strengthen resilience in the face of climate change’. It recognises the sustained efforts made by Instituto Raoni over more than ten years to protect the forests the Kayapo traditionally occupy, in the face of pressures – both legal and illegal – to displace them and grab their land for agriculture, mining and logging.

Here’s an Equator Initiative video about the Forest Protection award category winners, who come from Papua New Guinea, Cambodia and Tanzania, as well as Instituto Raoni from Brazil:

Recognising the precarious situation in Brazil, the Equator Initiative also made an award to the Mundurucu’s Ipereg Ayu community group in the Activism for Environmental Justice category. With the Belo Monte dam on the Xingu River nearing completion, the battle to prevent dam-related environmental destruction has moved on to the Tapajos River, where the Mundurucu territory is located. Here’s the video for that category:

The prize-giving ceremony in Paris was hosted by actor Alec Baldwin, who is a passionate supporter of environmental causes. There were speeches by leading activists like Dr Jane Goodall and iconic figures from the history of the environmental movement, including Gro Harlem Bruntland. You can see more videos from the other award categories, with material from the prize-giving ceremony, here;
Equator Prize 2015 Prizegiving Ceremony, Paris 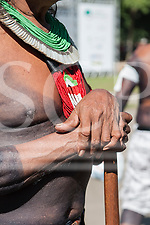 At the end of last year we received news of a breakthrough in the process of gaining the demarcation of this traditional Kayapo territory! FUNAI, the government’s Indian agency, moved the territory to the next stage in the convoluted process. We are now waiting for them to survey and map the boundaries of the area. Once this has been completed we will recommence fundraising to support the implementation of the necessary infrastructure for the Kayapo to fully occupy their traditional land.

Kapot Nhinore was where Chief Raoni was born, and where his parents are buried. It has long been occupied by ranchers, who have cleared the majority of the land for cattle ranching. Re-establishing the forest will be a long process, but Chief Raoni is determined that it will one day again be completely covered in forest. 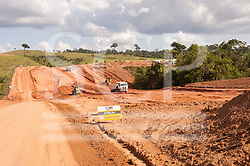 Sadly, the Brazilian government continues its dash for hydropower, ignoring the growing pleas for sense coming from all sides. Hydroelectricity is a bad idea. Huge dams cost huge amounts of money to build, result in enormous amounts of greenhouse gases being driven into the atmosphere, damage the natural environment of the rainforest, displace indigenous and traditional communities, and create social chaos in unprepared towns and villages as a result of uncontrolled mass migration.

There are cheaper and better alternatives. A combination of renewable energy sources like solar and wind power – both of which Brazil has in abundance, but seems reluctant to develop – combined with 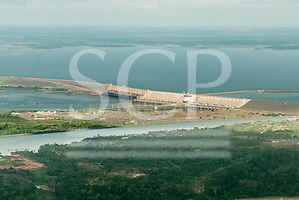 improvements in existing means of production and power transmission, and measures to use energy more efficiently, would contribute more to Brazil’s energy security at a much lower cost, and with little environmental damage or social upheval. But Brazil persists with last century’s model of development, pouring the nation’s scarce resources into the coffers of a few mega corporations and the deep pockets of corrupt politicians. Let’s hope the corruption scandals currently engulfing state oil company Petrobras – which also implicate the Belo Monte dam – will result in a comprehensive review of Brazil’s energy policy. 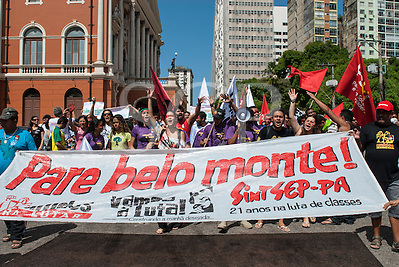 With the Belo Monte dam nearing completion, the Tapajos River is next in line for devastation by the hydropower dinosaurs. The Mundurucu Indians on the river are putting up a tremendous fight. We all hope they will have more success than the indigenous groups of the Xingu. The justice of their fight was recognised by the United Nations Development Programme in Paris; the Mundurucu were awarded the Equator Prize for Activism for Environmental Justice (see above).