In March 2007, Sue and Patrick Cunningham embarked on a gruelling expedition. They would travel the entire length – 2,500 kilometres – of the Xingu River.

During the six months of the expedition they uploaded weekly themed reports and photographs to a blog, which remains as an enduring record of their amazing experiences:

It was to be a life-changing experience. Although they had worked with indigenous communities in the area for over twenty years the expedition was to give them a much more comprehensive overview of the geography, politics and spiritual context of the river, and a profound understanding of the cultural differences which exist in the Amazon region. 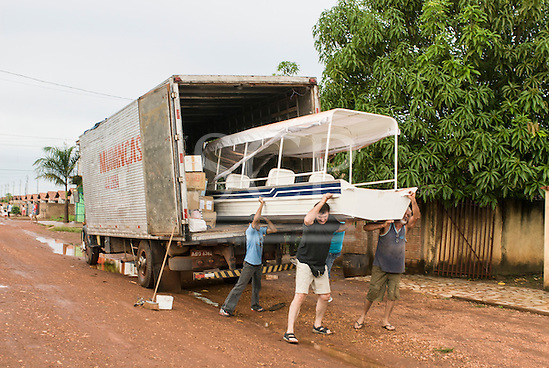 Setting out from the soya town of Canarana in the south of Mato Grosso State, they entered the Xingu Indigenous Park along the river, heading north towards the Amazon. They visited traditional tribal villages little changed from those which German ethnographer Karl von den Steinen visited in the 19th century.

They travelled through the Xingu Indigenous Park, and from there into the Kayapó territory. They stopped in São Felix do Xingu, a small and violent frontier town which lies close to the river, to upload pictures for the blog they were running on the BBC Brasil website. They navigated 400 kilometres of rapids as they passed through other indigenous territories until they reached the town of Altamira, close to where the Brazilian government is now building the infamous Belo Monte hydroelectric dam.

Finally they followed the lower reaches of the river to arrive in Porto de Moz, at the mouth of the river on the mighty Amazon.

You can read the blog they uploaded during the expedition here: