Chiefs Raoni Metuktire and Megaron Txucarramãe are coming to Europe. In the UK Tribes Alive has organised public meetings with University College, London (UCL) on Tuesday 10th June at 6:30pm, and with Oxford University on Wednesday 11th at 5pm.

Please join us for either of the meetings. For UCL please follow the link below to register. Attendance is free of charge but places are limited, so you need to register:

In Oxford, the venue will be the Blue Boar Lecture Theatre at Christ Church College. There is no need to register.

The Chiefs are here to highlight the failure of the Brazilian government to respect the rights of the indigenous peoples. Not a single indigenous territory (TIs) has been approved since April 2013 and only a handful were approved during the first two years of the Rousseff government, although over 33 percent have yet to be demarcated. In addition there are numerous proposals for changes to Brazil’s constitution and laws which would see indigenous rights drastically undermined. 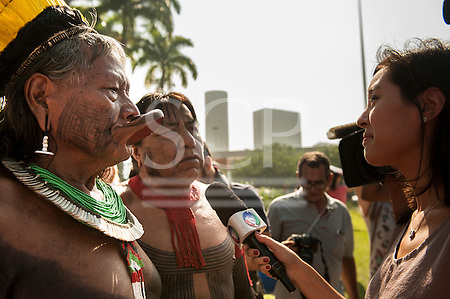 The indigenous people of Brazil today feel marginalised and discriminated against. The government has ignored the timetable laid down in the 1988 Constitution which said that demarcation of all indigenous territories (TIs) must be completed by 5th October 1993.

More than twenty years after that deadline expired a third of all TIs are still not approved.

The present government has the poorest record on demarcation of any since Brazil’s return to democracy, having initially slowed approval of demarcations to a trickle, then paralysed the process completely.

Brazil’s performance on the rights of indigenous peoples has been roundly condemned by the United Nations Special Rapporteur on Indiegenous Peoples and by the Inter-American Commission on Human Rights.

Over 500 indigenous people from 100 ethnic groups last week staged marches and demonstrations in Brasilia, in the run-up to the World Cup, using the event to highlight government failings and to protest against the proposed changes to the law.

During their visit to Europe, which has been organised by French NGO Planète Amazone, Chiefs Raoni and Megaron will be meeting representatives of the French and British governments, King Harald of Norway and Prince Albert of Monaco. In the UK they will have a personal audience with Prince Charles.